Just when you think you have your entire room ferret-proofed.......

This post is very hard to write but I feel I need to share my experiance so it helps all ferret owners and all ferrets.
( Collapse )
Thanks for listening everyone and keep your ferrets safe. 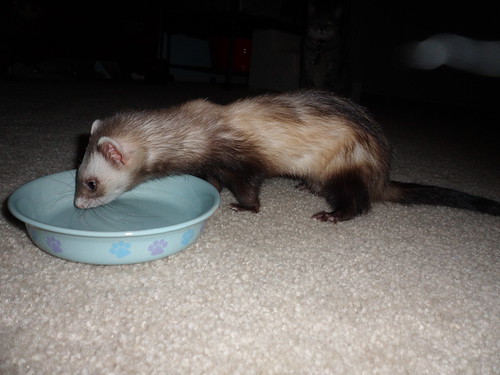 I am about 99% convinced that I would like to adopt a ferret in the fall. I have been researching the topic for about three weeks now, and I think a ferret and I would be a very good combination. I have been lurking on this comm (and two others, though I haven't been able to join there for some reason) and I have a few questions that I haven't been able to answer to my own satisfaction through the power of Google that I thought I would put to you, if you don't mind. I am trying to put all my ducks in a row before taking the plunge, because the thought of bringing a bright, energetic animal like a ferret into my home and then realizing we're not a good fit or I missed something is absolutely abhorrent to me. I take my pet ownership responsibilities very seriously.


1- This one is location-specific, and I'm asking only because Google has failed me. I live in Montreal, Qc, Canada, and I would love to adopt a ferret from a rescue organization. I've made some inquiries with the local SPCA and they have been, um, unhelpful, to put it politely. It's their busy season (moving day is July 1st here, and that comes with a lot of abandoned animals), and they basically told me they don't have time to answer my questions or let me come by for an appointment (despite repeated attempts on my part). Does anyone know of a ferret-specific rescue within a reasonable driving distance of Montreal?

2- I have three cats, but they're pretty old and very laid-back, and I think they would be okay with an addition to the household. However, there appear to be varying schools of thought on how to introduce a ferret into a household with cats and on how much supervision is required once the ferret is established. Can anyone provide some first-hand accounts of how this worked out (or not) for them?

3- Since I'm going to try for a rescue, I would like to know what to look out for in terms of health and behavioural problems in a ferret. I've never really interacted properly with one (I mean to remedy this if I can before I adopt, just to be sure), and thus only know theoretically what constitutes "normal" behaviour. I've checked the regular FAQs on many websites and I think I have the basics down, but again I would love to have your insight into the matter. Are there subtle symptoms of illness that I should be aware of? What might constitute a behavioural issue that a novice ferret owner wouldn't really be able to deal with?

4- Ideally I'd like to have all my pet supplies ready before the adoption. I've lined up a second-hand cage that I'm told is 30 X 17 X 30. Is this a suitable size for a ferret that will be let out of its cage for at least four to six hours a day, or does it still need something bigger? Is there any particular bedding I should avoid (Years ago I learned from my vet that cedar chips are really bad for hamsters, which I never knew, so I figure something comparable might apply to ferrets that's not commonly known) Also, I would love to hear what sorts of toys/accessories your ferrets have loved the most. There are so many choices out there, and I know that my cats far prefer a crumpled up ball of newspaper to the fanciest cat toy available, so again I figure this might be something that experienced ferret owners would know best.

5- General question: When you got your first ferret(s), what do you wish someone more knowledgeable had told you to look for or do? What would you do differently, looking back? Now that you have that 20/20 hindsight working in your favour. ;)

Thank you so much for putting up with all my n00b questions, and for whatever help you're able to give me on this. If/when I get my new critter, I will be sure to post back with pictures and stories.

(Okay, I tried tagging this but very few of the tags actually seem to apply. Sorry!)
I'm working on a move to the UK (more specifically England) and I'm wondering if there is anyone from the London area (or England in general) who can give me an idea of how easy (or hard) it is to find a rental home when you have ferrets?

I know in Canada (more specifically Saskatchewan) it's damned near impossible (1 out of 15 places, if that!)... and the last thing I want is to go through the microchipping, and vet bills just to find out that once there, I'll not be able to find a home!

Any help would be fantastic! And would save me hours of internet research!

Hi all! I have a question about one of my boys that I was hoping you could help me with. My baby is ~6 years old right now and was diagnosed with insulinoma a few months ago. He's been doing great on his medicine and his alertness and interest in his surroundings has come back, though of course he is an older ferret and his energy levels aren't what they used to be. Mostly he's a cuddler now. My question has to do with something I have noticed him doing - basically, I have seen him licking his urine on exactly three occasions since he went on his medication. All three times, he seemed to be caught a little off-guard by the urge to urinate (which our vet said is a rare side effect of the meds), and I interpreted the licking as an attempt to clean himself and the floor up. I've done a little reading up on urine-drinking and I've seen everything from it being totally normal to it being a sign of pathology that needs to be looked into by a vet. What do you think?

I haven’t been around much. You may (or may not) recall that last fall, our beloved Kaylee was diagnosed with severe cardiomyopathy. We treated it aggressively and she got better for a while, but a few months later she suddenly crashed. There was literally nothing that could be done, and we had to let her go that night (right before Christmas vacation). Also last fall, Fiona was diagnosed with insulinoma. It didn’t seem that bad, and we treated it carefully; she seemed to be doing fine. But a month after losing Kaylee, we came home from work to find that Fiona had died during the day. It seemed to be a peaceful passing, so we’re grateful for that, but still. Sometimes I wonder if she just gave up living; she had been with Kaylee her whole life, and she never really took to Hurricane Gabriel.

Gaby missed his companions and wanted to be with me all the time. Not having recently won the lottery, there was no way I could quit my job and stay home to attend to the needs and whims of one small animal. We started to think about getting him a buddy, a shelter fuzzy in the same age range with an easygoing temperament. I’ll spare you the dithering, but we finally made it happen and it is now my pleasure to present to you Oliver, aka Ollie, aka Ollie-pop, aka Tropical Storm Oliver (click to make him bigger and cuter): He's just a bit shy. Let's see if we can get him to show himself a little later. We adopted him from our local shelter, Denise's Delightful Dookers, in early April. We named him Oliver after the Dickens character, because his was a sad story but we hope it too has a happy ending. Ollie was found by somebody in a field in Bellevue in the *middle of January* and turned over to Animal Control, who brought him to DDD. We have no idea if he got out and his owner couldn't find him (although s/he could have looked harder, amirite?) or if he was dumped. Denise worked hard to get him fed and healthy enough for me to come along and meet him. He's a big boy, almost three pounds now, probably a couple years old, with butterscotch fur that is now so very soft and fluffy. As you can see, he has a sincere and earnest little face. ( Collapse )

We are pretty happy to have him in our weird little family. I hope he and Hurricane Gabriel have a long and happy life with us.

Let me leave you with one last picture of my beloved girls sleeping peacefully. I like to remember them like this. 4 different ferrets. Kibble fed ferrets up top and my raw fed girls on the bottom. Look at the gums too! Ouch!

#3 (Munchie) used to have teeth like the above ferrets.

They also only poop about twice a day (very tiny poops) and don't smell. Yay! lol

X-Posted, sorry if you see it a lot!!

I took some photos today of the meepers. They are 4.5 weeks old now.

I'm Jessica, I have three young ferrets, I thought I would start out with an introduction of me and my three troublemakers, as well as a bit about my daughter. =]